The ray diagrams are as follows:

Similarly, the nature of the image formed in case of concave mirror, depends on the position of the object.

The ray diagrams are:

When an incident ray is parallel to the principal axis, the reflected ray appears to be coming from the focus and when incident ray moves towards the center of curvature, the reflected ray retraces the path. These two rules show that the reflected rays are diverging and when produced back-wards, the rays appear to meet. Thus, this mirror always produces a virtual image which is always erect. Mirror 'B' is a concave mirror. The nature, position and size of the image formed by a concave mirror depends on the position of the object in relation to points P(Pole), F(focus) and C(center of curvature) of the mirror.

Case 1. When. the object is placed between P and F-the two reflected rays (one passes through the focus and other retraces through center of curvature) are diverging and appear to meet in backward direction. This produces a virtual and erect image.

Case 2. As the object moves away from the mirror beyond F the two reflect rays actually meet below the principal axis which produces a real and inverted image. 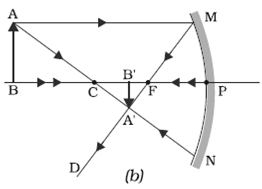 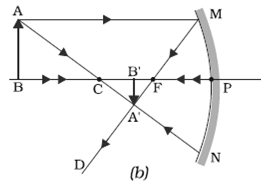 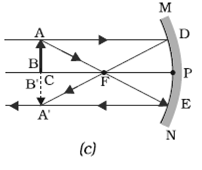 How useful is this solution?We strive to provide quality solutions. Please rate us to serve you better.
PREVIOUSA student focused
Related Videos