7. System of Particles and Rotational Motion

Both spheres are identical.

Since bodies are starting from rest, there initial KE is zero,

m is mass of the bodies

g is acceleration due to gravity

h is height of inclined plane

On reaching bottom, the potential energy drops to zero (PEf = 0)

Therefore, total energy of bodies at bottom are KE of bodies.

m is mass of body

vf is velocity attained by body

I is moment of inertia

By Law of conservation of energy, we have,

The final velocity is independent of angle of inclination. Therefore

both bodies will have same final speed on reaching ground. 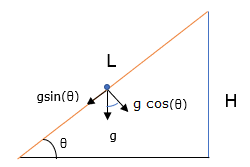 When a body is moving on an inclined plane of inclination θ, acceleration acting on body is g (acceleration due to gravity vertically downward)

Let height from which body fall be H.

Then length of inclined plane of inclination θ,

We know the equation,

u is initial velocity

a is acceleration acting on body

For case of motion along plane,

From above equation, we can infer that time taken by a body to roll down an inclined plane is inversely proportional to sin of angle of inclination (θ).

Thus greater the angle of inclination, lower the time needed for reaching ground.

A disc of radius

A solid disc and

A disc rotating a

A uniform disc of

Two friends A and

A cylinder of mas

Why does the poet