Suppose a satellite is orbiting earth’s surface, Seattleite will be out of earth’s influence when its total energy is Zero or positive and we know Total energy of a body is sum of kinetic energy and potential energy

Kinetic Energy is given as

Where K is the kinetic energy of a body of mass m, moving with velocity v

If Body have to move out of Earth’s influence its total energy should be positive i.e. 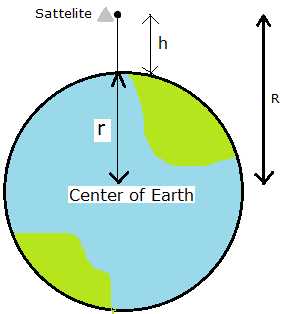 Where Ui and Ki are initial kinetic and potential energy of the satellite respectively i.e.

The total energy of satellite will be negative and is half of the potential energy, we follow the relation

Where T is the total energy, U is potential energy and K is kinetic energy

Where M is mass of earth which is

m is mass of satellite which is

r is the radius of the earth

so putting values in above equation, we get

So The energy expended to move the satellite out of earth’s gravitational field is 5.9 x 109 J

How useful is this solution?We strive to provide quality solutions. Please rate us to serve you better.
PREVIOUSThe escape speed of a projectile on the earth’s surface is 11.2 km s–1. A body is projected out with thrice this speed. What is the speed of the body far away from the earth? Ignore the presence of the sun and other planets.NEXTTwo stars each of one solar mass (= 2 × 1030 kg) are approaching each other for a head-on collision. When they are a distance 109 km, their speeds are negligible. What is the speed with which they collide? The radius of each star is 104 km. Assume the stars to remain undistorted until they collide. (Use the known value of G).
Related Videos

Getting the basics of Gravitation51 mins

A particle is fired vertically upward from the earth’s surface and it goes up to a maximum height of 6400 km. Find the initial speed of the particle.

The escape speed of a projectile on the earth’s surface is 11.2 km s–1. A body is projected out with thrice this speed. What is the speed of the body far away from the earth? Ignore the presence of the sun and other planets.

As you have learnt in the text, a geostationary satellite orbits the earth at a height of nearly 36,000 km from the surface of the earth. What is the potential due to earth’s gravity at the site of this satellite? (Take the potential energy at infinity to be zero). Mass of the earth = 6.0 × 1024 kg, radius = 6400 km.