(a) For a geostationary satellite, the centripetal force must equal the gravitational force. Let the mass of earth be M and the satellite be m, then

where T is the time period of revolution, then

Now the height h of the satellite from the surface of the earth,

where R is the radius of earth.

For a geostationary satellite, the time period is 24 hours or 86400 seconds,

(b) A geostationary satellite is visible form the equator in the region shown in the figure having an angle 2θ, 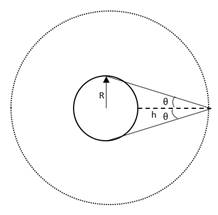 Now from the figure we have

Now 2θ = 162.58, therefore to cover the earth with such satellites so that from any point on the equator a satellite can be seen,

Therefore, we need a minimum of 3 satellites.

How useful is this solution?We strive to provide quality solutions. Please rate us to serve you better.
PREVIOUSSix point masses of mass m each are at the vertices of a regular hexagon of side l. Calculate the force on any of the masses.NEXTEarth’s orbit is an ellipse with eccentricity 0.0167. Thus, earth’s distance from the sun and speed as it moves around the sun varies from day to day. This means that the length of the solar day is not constant through the year. Assume that earth’s spin axis is normal to its orbital plane and find out the length of the shortest and the longest day. A day should be taken from noon to noon. Does this explain variation of length of the day during the year?
Related Videos