Rocket fired from surface of Earth and will have kinetic energy(Positive) by virtue of speed which is taking it away from surface of Earth, and gravitational potential energy(Negative) is trying to pull it towards the centre of Earth, total energy of the rocket is the sum of kinetic energy and gravitational potential energy , and total energy is conserved , i.e. will remain same

Now as rocket is fired upward Earth’s gravity will apply force on it pull it back, and speed of rocket will decrease and kinetic energy also, potential energy on another hand will increase and become less negative and at a maximum height h above the surface of Mars at a distance R from centre of mars of radius r, all kinetic energy will be converted to potential energy, and rocket will come to rest and then will revert back towards surface of Mars 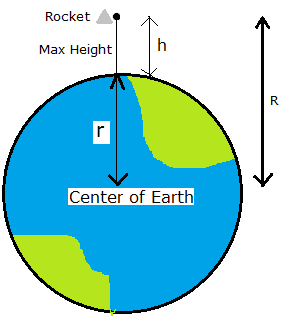 We know Kinetic Energy is given as

Where K is the kinetic energy of a body of mass moving with speed v, here we are given

The initial speed of Rocket as

let Mass of the rocket be m

so kinetic energy is

Now Gravitational potential at a point is given by the relation

Where U is the potential Energy of a body of mass m at a point at a distance R from a center of mass of Body of mass M, G is universal Gravitational constant

Initially, Rocket is at the surface of Earth so its distance from the centre of mars is equal to the radius of Earth i.e.

let Mass of the rocket be m

mass of planet Earth is

So putting these value we get initial potential energy Ui as

Now finally after reaching a height h, the rocket will come to rest and its velocity will be 0, i.e.

so final kinetic energy will also be zero i.e.

Now after reaching a height h, the distance of rocket from the centre of mars will be

So final potential energy Uf will be

Where T is the total energy, U is potential energy and K is kinetic energy

So total initial energy will be

So Total Final Energy will be

Now by the law of conservation of energy, we know the total initial energy of rocket must be equal to the total final energy of the rocket i.e.

After cross multiplication we get

so we get h as

Its Distance from centre of earth will be

Where r is the radius of earth which is

How useful is this solution?We strive to provide quality solutions. Please rate us to serve you better.
PREVIOUSAssuming the earth to be a sphere of uniform mass density, how much would a body weigh half way down to the center of the earth if it weighed 250 N on the surface?NEXTThe escape speed of a projectile on the earth’s surface is 11.2 km s–1. A body is projected out with thrice this speed. What is the speed of the body far away from the earth? Ignore the presence of the sun and other planets.
Related Videos