Given: Length of the rectangular loop=l

Breadth of the rectangular loop=b

We have to find the emf induced in the loop by Faradays’s Law.

Faraday’s law states that whenever the magnetic flux through

a closed surface changes, there will be an induced emf prodced in

the loop that encloses the surface. The mathematical relation is

is the magnitude of the induced emf, ϕB is the the magnetic

flux through the surface. The negative sign arises because the

The wire which is near the loop is responsible for the magnetic field .

right hand thumb rule, the magnetic field will be perpendicular to the

plane of the paper in the inward direction. 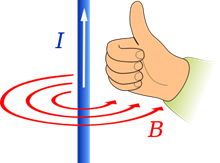 We have to now calculate the magnetic field acting across the loop.

at a distance of x from wire. The magnteic field on this element due

to the current carrying wire is given by Ampere circuital law.

(cos θ=1 because the

vector are both acting in ward in the plane of paper so θ=0°, here dl is a small current carrying element of the circular amperian loop)

The magnetic flux through this element will be

(taking constants out of the integral)

The flux through the loop is

The emf induced will be

(taking constants out of the differential)

The magnitude of the induced emf is

A rod of mass m a