Rainbow is a natural spectrum appearing in the sky after a rain shower. It is formed due to combination of phenomenon like refraction, dispersion and total internal reflection of light. Water droplets act like small prisms which refract and disperse the incident sunlight. Then they reflect it internally and finally again refract it to form rainbow in the sky. 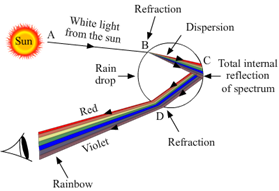