Therefore, options A and D are correct. 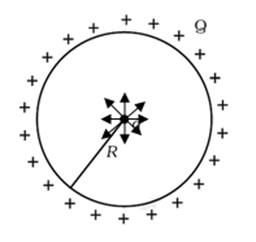 When a negative charge is displaced away from the centre in the plane of the ring, it will experience an attractive force and it will move until it hits the ring. Therefore, option B is also correct.

The electric field due to the positively charged ring is along the axis AB in positive x direction of the ring shown below.

Where q is the positive test charge

In the plane of the ring,

Equation (2) says that there is no force or electric field at the centre of the ring independent of any charged particle.

If now a negatively charged particle

from the centre of the ring towards the +x direction along x-axis, the force on it, will be

Therefore, the force on negatively charged particle now is in positive x direction.

This process continues and the charge moves to and fro along the axis. Thus, we say that the particle performs Simple Harmonic Motion (SHM) along the x axis shown below.