A population of P

Sigmoid type of growth curve would be obtained. Which shows a population growing in a habitat having limited resources.

The graph obtained is shown below: 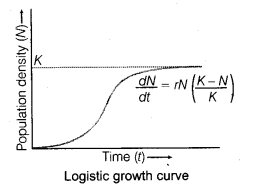 1.The graph shows an initial lag phase. After that an increase in population takes place due to the availability of nutrients also known as acceleration. Following which deceleration takes place as the available nutrients got depleted because of excessive usage and growth of paramoecium stops. At last asymptote occurs.

2.When the population reaches carrying capacity. A plot is formed showing sigmoid curve.

3.This type of growth is known as Verhulst-Pearl logistic growth.

4.This is represented by an equation: dN/dT=rN(K-N/K)

Find a vector in

Show that the vec