The time from which the wooden sample came died

The rate the disintegration for ancient wood;

= 12, rate the disintegration for living wood;

= 5760 years. To find the time for the death of the sample find the relationship between rate of decay and time taken to decay.

Rutherford and Soddy Radioactive Decay Law: The law tells us that the chances of a radioactive decay of an atom with respect to time is constant in nature and is independent of time. The formula is

is the initial quantity of the substance,

is the quantity that remained after initial decay,

is called the decay constant can be written as

, T is the time required for the decay.

The rate of disintegration of Ancient wood (

can be written as

After calculation we get the solution as

How useful is this solution?We strive to provide quality solutions. Please rate us to serve you better.
PREVIOUSConsider a radioactive nucleus A which decays to a stable nucleus C through the following sequence:A → B → CHere B is an intermediate nucleus which is also radioactive. Considering that there are atoms of A initially, plot the graph showing the variation of number of atoms of A and B versus time.NEXTAre the nucleons fundamental particles, or do they consist of still smaller parts? One way to find out is to probe a nucleon just as Rutherford probed an atom. What should be the kinetic energy of an electron for it to be able to probe a nucleon? Assume the diameter of a nucleon to be approximately 10–15 m.
Related Videos

A. A radioactive nucleus ‘A’ undergoes a series of decays as given below :

The mass number and atomic number of

are 176 and 71 respectively. Determine the mass and atomic numbers of

(i) Verify this by calculating the proton separation energy

The proton separation energy for a nuclide is the minimum energy required to separate the least tightly bound proton from a nucleus of that nuclide. It is given by

(ii) What does the existence of magic number indicate?

The activity R of an unknown radioactive nuclide is measured at hourly intervals. The results found are tabulated as follows: 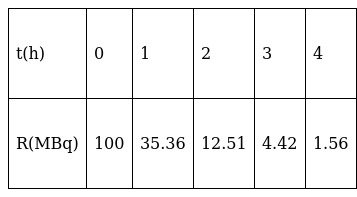 (i) Plot the graph of R versus t and calculate half-life from the graph.

(ii) Plot the graph of

versus t and obtain the value of half-life from the graph.

(a) Write the relation between half-life and average life of a radioactive nucleus.

(b) In a given sample two isotopes A and B are initially present in the ratio of 1:2. Their half-lives are 60 years and 30 years respectively. How long will it take so that the sample has these isotopes in the ratio of 2:1?

A charged capacitor of capacitance C is discharged through a resistance R. A radioactive sample decays with an average-life τ. Find the value of R for which the ratio of the electrostatic field energy stored in the capacitor to the activity of the radioactive sample remains constant in time.

Sometimes a radioactive nucleus decays into a nucleus which itself is radioactive. An example is: 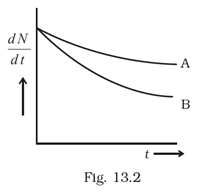 ‘‘After introducing the Permanent Settlement in Bengal, the zamindars regularly failed to pay the land revenue demand.’’ Examine the causes and consequences of it.