A passenger in an aero plane shall
A. never see a rainbow.

B. may see a primary and a secondary rainbow as concentric circles.

C. may see a primary and a secondary rainbow as concentric arcs.

As aero plane is at higher altitude, the passenger in an aero plane may see a primary and a secondary rainbow like concentric circles.

How useful is this solution?We strive to provide quality solutions. Please rate us to serve you better.
PREVIOUSProfessor C.V Raman surprised his students by suspending freely a tiny light ball in a transparent vacuum chamber by shining a laser beam on it. Which property of EM waves was he exhibiting? Give one more example of this property.NEXTWhat is the shape of the wave front on earth for sunlight?
Related Videos

Questions Based on Constraint Motion - Back to 11th46 mins

(ii) Light from a point source in air falls on a convex spherical glass surface of refractive index 1.5 and radius of curvature 20 cm. The distance of light source from the glass surface is 100 cm. At what position is the image formed?

(a) Draw a labeled ray diagram to obtain the real image formed by an astronomical telescope in normal adjustment position. Define its magnifying power.

(i) Which lenses should he used as objective and eyepiece? Justify your answer.

(ii) Why is the aperture of the objective preferred to be large?

A symmetric biconvex lens of radius of curvature R and made of glass of refractive index 1.5, is placed on a layer of liquid placed on top of a plane mirror as shown in the figure. An optical needle with its tip on the principal axis of the lens is moved along the axis until its real, inverted image coincides with the needle itself. The distance of the needle from the lens is measured to be x. On removing the liquid layer and repeating the experiment, the distance is found to be y. Obtain the expression for the refractive index of the liquid in terms of x and y. 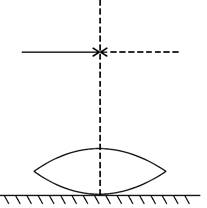 Mrs. Rashmi Singh broke her reading glasses. When she went to the shopkeeper to order new specs, he suggested that she should get spectacles with plastic lenses instead of glass lenses. On getting the new spectacles, she found that the new ones were thicker than the earlier ones. She asked this question to the shopkeeper but he could not offer satisfactory explanation for this. At home, Mrs. Singh raised the same question to her daughter Anuja who explained why plastic lenses were thicker.

A. Write two qualities displayed each by Anuja and her mother.

B. How do you explain this fact using lens maker’s formula?

(a) Describe any two characteristic features which distinguish between interference and diffraction phenomena. Derive the expression for the intensity at a point of the interference pattern in Young’s double slit experiment.

(b) In the diffraction due to a single slit experiment, the aperture of the slit is 3 mm. If monochromatic light of wavelength 620 nm is incident normally on the slit, calculate the separation between the first order minima and the 3rd order maxima on one side of the screen. The distance between the slit and the screen is 1.5 m.

(a) Under what conditions is the phenomenon of total internal reflection of light observed ? Obtain the relation between the critical angle of incidence and the refractive index of the medium.

(b) Three lenses of focal lengths +10 cm, –10 cm and +30 cm are arranged coaxially as in the figure given below. Find the position of the final image formed by the combination.

Three immiscible liquids of densities d1 > d2 > d3 and refractive indices μ1 > μ2 > μ3 are put in a beaker. The height of each liquid column is

. A dot is made at the bottom of the beaker. For near normal vision, find the apparent depth of the dot.

Obtain an expression for focal length of a combination of thin lenses in contact.

An equi-convex lens (of refractive index 1.50) is placed in contact with a liquid layer on top of a plane mirror as shown. A small needle with its tip on the principal axis is moved along the axis until its inverted image is found at the position of the needle. The distance of the needle from the lens is measured to be 45.0 cm. The liquid is removed and the experiment is repeated. The new distance is measured to be 30.0 cm. What is the refractive index of the liquid? 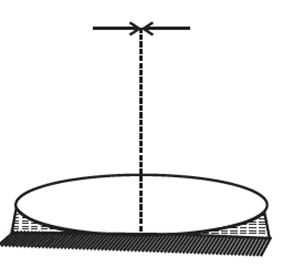