A particle of mass m and positive charge q, moving with a uniform velocity v, enters a magnetic field B as shown in figure.

(a) Find the radius of the circular arc it describes in the magnetic field.

(b) Find the angle subtended by the arc at the centre.

(c) How long does the particle stay inside the magnetic field?

(d) Solve the three parts on the above problem if the charge q on the particle is negative.

The radius of the circle is given by,

(b) The angle subtended by the arc at the centre 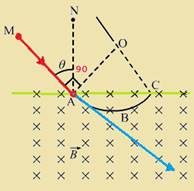 Line MAB is the tangent to arc ABC,

When the particle enters into the magnetic field, it follows a path in the form of arc as shown in fig.

Now, the angle described by the charged particle is nothing but the angle ∠ MAO is ,

Distance covered by the particle inside the magnetic field,is the length of arc subtended by angle θ and the radius

time taken for a complete cycle will be its circumference

the velocity is V -

Also The radius of the circle is given by,

(d) If the charge q on the particle is negative, then 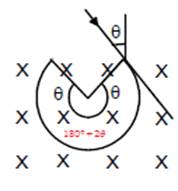 (i) Radius of circular arc is given by

(ii) The centre of the arc lies within the magnetic field

Therefore, the angle subtended by the arc =

How useful is this solution?We strive to provide quality solutions. Please rate us to serve you better.
PREVIOUS(a) An electron moves along a circle of radius 1 m in a perpendicular magnetic field of strength 0.50 T. What would be its sped? Is it reasonable?(b) If a proton moves along a circle of the same radius in the same magnetic field, what would be its speed?NEXTA particle of mass m and charge q is projected into a region having a perpendicular magnetic field B. Find the angle of deviation figure of the particle as it comes out of the magnetic field if the width d of the region is very slightly smaller than(a) (b). (c)
Related Videos