A particle of mass m and charge q is projected into a region having a perpendicular magnetic field B. Find the angle of deviation figure of the particle as it comes out of the magnetic field if the width d of the region is very slightly smaller than

Mass of the particle = m

Charge of the particle = q 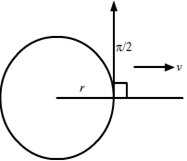 d is equal to the radius

θ is the angle between the radius and tangent drawn to the circle , which is equal to

Now, in this case, the width of the region in where magnetic field is applied is half of the radius of the circular path.

As the magnetic force is acting only along the y –axis,the velocity of the particle will remain constant along the x-axis.

So, if d distance is travelled along the x axis,

for constant velocity the acceleration along the x direction is zero.

Hence the force will act only along the y direction.

Using the 3rd equation of motion along the y axis-

since, initial velocity is 0 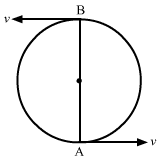 From above fig., it can be concluded that the angle between the initial direction and final direction of velocity is

How useful is this solution?We strive to provide quality solutions. Please rate us to serve you better.
PREVIOUSA particle of mass m and positive charge q, moving with a uniform velocity v, enters a magnetic field B as shown in figure.(a) Find the radius of the circular arc it describes in the magnetic field.(b) Find the angle subtended by the arc at the centre.(c) How long does the particle stay inside the magnetic field?(d) Solve the three parts on the above problem if the charge q on the particle is negative.NEXTA narrow beam of singly charged carbon ions, moving at a constant velocity of 6.0 × 104ms–1, is sent perpendicularly in a rectangular region having uniform magnetic field B = 0.5 T figure. It is found that two beams emerge from the field in the backward direction, the separations from the incident beam being 3.0 cm and 3.5 cm. Identify the isotopes present in the ion beam. Take the mass of an ion = A(1.6 × 10–27) kg, where A is the mass number.
Related Videos