A particle of mass m and charge (–q) enters the region between the two charged plates initially moving along x-axis with speed vx(like particle 1 in Fig. 1.33). The length of plate is L and an uniform electric field E is maintained between the plates. Show that the vertical deflection of the particle at the far edge of the plate is

Compare this motion with motion of a projectile in gravitational field discussed in Section 4.10 of Class XI Textbook of Physics.

Mass of the particle = m

Charge of the particle = -q

Velocity of the particle = vx

Length of the plate = L

Electric field between the plates = E

From Newton’s second law of motion,

Where, F = Force on the particle

m = mass of the particle

a = acceleration of the particle

For the movement in vertical direction, initial velocity (u) is zero.

According to Newton’s second equation of motion,

This is the vertical displacement of the particle at the far edge of the plate.

NOTE: A projectile is any object thrown into space by the exertion of a force. The path followed by a projectile is known as its trajectory.

How useful is this solution?We strive to provide quality solutions. Please rate us to serve you better.
PREVIOUS(a) Consider an arbitrary electrostatic field configuration. A small test charge is placed at a null point (⇒, where E = 0) of the configuration. Show that the equilibrium of the test charge is necessarily unstable.(b) Verify this result for the simple configuration of two charges of the same magnitude and sign placed a certain distance apart.NEXTSuppose that the particle in Exercise in 1.33 is an electron projected with velocity vx= 2.0 × 106 m s–1. If E between the plates separated by 0.5 cm is 9.1 × 102 N/C, where will the electron strike the upper plate? (|e| = 1.6 × 10–19 C, me= 9.1 × 10–31 kg.)
Related Videos 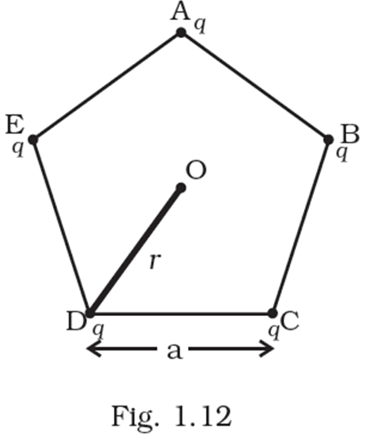 (a) (i) What will be the electric field at O, the center of the pentagon?

(ii) What will be the electric field at O if the charge from one of the corners (say A) is removed?

(iii) What will be the electric field at O if the charge q at A is replaced by –q?

(b) How would your answer to (a) be affected if pentagon is replaced by n-sided regular polygon with charge q at each of its corners?

Fig. 1.10 represents a crystal unit of cesium chloride, CsCl. The cesium atoms, represented by open circles are situated at the corners of a cube of side 0.40nm, whereas a Cl atom is situated at the centre of the cube. The Cs atoms are deficient in one electron while the Cl atom carries an excess electron. 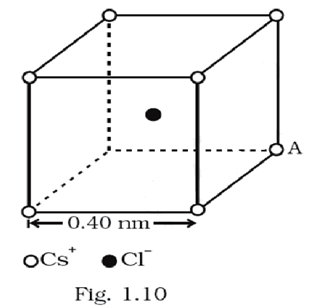 (i) What is the net electric field on the Cl atom due to eight Cs atoms?

(ii) Suppose that the Cs atom at the corner A is missing. What is the net force now on the Cl atom due to seven remaining Cs atoms?

(a) Find the electric force and the force of gravity acing on this particle. Can one of these forces be neglected in comparison with the other for approximate analysis?

(b) How long will it take for the particle to travel a distance of 40 cm?

(c) What will be the speed of the particle after travelling this distance?

(d) How much is the work done by the electric force on the particle during this period?

A positive charge q is placed in front of a conducting solid cube at a distance d from its center. Find the electric field at the center of the cube due to the charges appearing on its surface.

A rod of length L has a total charge Q distribute uniformly along its length. It is bent in the shape of a semicircle. Find the magnitude of the electric field at the centre of curvature of the semicircle.

Consider a uniformly charged ring of radius R. Find the point on the axis where the electric filed is maximum.