A particle is in linear simple harmonic motion between two points A and B, 10 cm apart (Fig. 14.6). Take the direction from A to B as the + ve direction and choose the correct statements.

A. The sign of velocity, acceleration and force on the particle when it is 3 cm away from A going towards B are positive.

B. The sign of velocity of the particle at C going towards O is negative.

C. The sign of velocity, acceleration and force on the particle when it is 4 cm away from B going towards A are negative.

D. The sign of acceleration and force on the particle when it is at point B is negative.

The force always acts in the direction of the mean position and at point C it is acting towards O and away from A. Thus positive.

Also, acceleration is in the direction of force thus it is also acting in the same direction as force and is positive.

Also, the direction of motion is towards A and thus velocity is also positive.

Hence option (a) is correct.

b) when particle is at C the velocity is in direction towards O thus positive and hence option (b) is incorrect.

How useful is this solution?We strive to provide quality solutions. Please rate us to serve you better.
PREVIOUSA body is performing S.H.M. Then itsNEXTDisplacement versus time curve for a particle executing S.H.M. is shown in Fig. 14.7. Identify the points marked at which (i) velocity of the oscillator is zero, (ii) speed of the oscillator is maximum.
Related Videos

Energy & Power of a Wave60 mins

A tunnel is dug through the centre of the Earth. Show that a body of mass ‘m’ when dropped from rest from one end of the tunnel will execute simple harmonic motion.

One end of a V-tube containing mercury is connected to a suction pump and the other end to atmosphere. The two arms of the tube are inclined to horizontal at an angle of 45° each. A small pressure difference is created between two columns when the suction pump is removed. Will the column of mercury in V-tube execute simple harmonic motion? Neglect capillary and viscous forces. Find the time period of oscillation.

Draw a graph to show the variation of P.E., K.E. and total energy of a simple harmonic oscillator with displacement.

A simple pendulum of time period 1s and length l is hung from a fixed support at O, such that the bob is at a distance H vertically above A on the ground (Fig. 14.11). The amplitude is θ0. The string snaps at θ = θ0 /2. Find the time taken by the bob to hit the ground. Also find distance from A where bob hits the ground. Assume θ0 to be small so that sine and cosine is equal to 1. 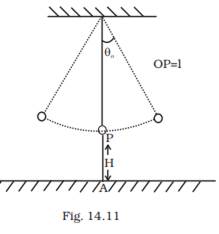 A cylindrical log of wood of height h and area of cross-section A floats in water. It is pressed and then released. Show that the log would execute S.H.M. with a time period.

where m is mass of the body and ρ is density of the liquid.

A body of mass m is attached to one end of a massless spring which is suspended vertically from a fixed point. The mass is held in hand so that the spring is neither stretched nor compressed. Suddenly the support of the hand is removed. The lowest position attained by the mass during oscillation is 4cm below the point, where it was held in hand.

(a) What is the amplitude of oscillation?

(b) Find the frequency of oscillation?

Find the displacement of a simple harmonic oscillator at which its P.E. is half of the maximum energy of the oscillator.

Consider a pair of identical pendulums, which oscillate with equal amplitude independently such that when one pendulum is at its extreme position making an angle of 2° to the right with the vertical, the other pendulum makes an angle of 1° to the left of the vertical. What is the phase difference between the pendulums?

A mass of 2 kg is attached to the spring of spring constant 50 Nm-1. The block is pulled to a distance of 5cm from its equilibrium position at x = 0 on a horizontal frictionless surface from rest at t = 0. Write the expression for its displacement at any time t.