(a) The types of flowers produced by Viola (Pansy) are: chasmogamous and cleistogamous flowers.

They differ from each other in the following way:

(b) The kind of pollination in one of the types of flowers that ensures seed-set production is termed as cleistogamy. Cleistogamous flowers do not open at all and in them, the anthers and stigma are close to one another. There is no means by which cross-pollination between two flowers can take place here, so this makes them autogamous (the process of self-fertilization in plants.) So, assured seed-set is produced even when pollinators aren't present. This diagram shows the female and male flowers in Vallisneria and a brief on how the pollination is taking place by water acting as the external agent.

OR
(a) The technique that can help a healthy married woman who is unable to produce viable ova but wants to bear a child is Gamete intra fallopian transfer (GIFT) where an ovum collected from a donor is transferred to fallopian tube of the healthy married woman who cannot produce ova, but would be able to provide suitable conditions for fertilization and for the further foetus development till parturition (process of delivery of the foetus).

(b) Ovum is a single cell released from either of the ovaries of the female reproductive system. When it is fertilized, it is capable of developing into a new individual. (c) Polyspermy is when an egg has been fertilized by more than one sperm.

Polyspermy is prevented in humans as during fertilization,binding of one sperm to the egg or when it comes in contact with the zone pellucida layer of the ovum, it induces depolarization of the egg plasma membrane which eventually blocks the entry of further sperms thus does not let any other sperms to fertilize the egg. 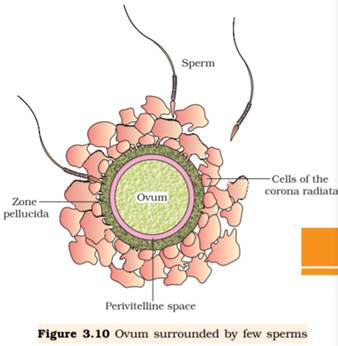 The diagram shows how after one sperm has come in contact with the zona pellucida, no other sperm is allowed entry because of depolarization of the plasma membrane.