Heroin commonly called as smack is an example of opiate narcotics, made from morphine. It is a white, odourless and bitter crystalline compound. Clinically it is used as an analgesic (painkiller).

(a) Chemically, heroin is diacetyl morphine. it is obtained by acetylation of morphine. Morphine is extracted from the latex of poppy plant Papaver somniferum.

(b) Heroin is generally taken by snorting or through injections. It acts as a depressant by affecting the central nervous system (CNS). It binds to the specific opiod receptors present in our CNS and slows down body functions. It acts as an effective sedative and is useful for patients who have undergone surgery. 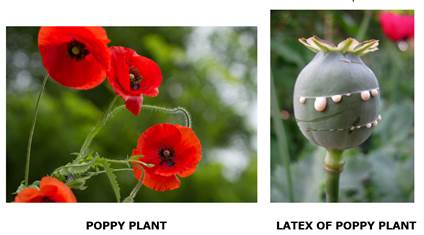