(a) Name the popu

Importance of ‘r’ in population growth:

• This is the parameter for assessing the impacts of any biotic or abiotic factor on population growth.

(b) In nature , a given habitat has enough resources to support a maximum possible number, beyond which no further growth is possible. This is called Carrying capacity (K) of a habitat. 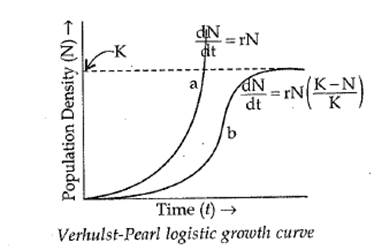 The logistic growth model is considered more realistic since, resources for growth of most animal populations are finite and become limited sooner or later.

(a): Energy flow in an ecosystem is always Unidirectional.

There is decrease in content and flow of energy with rise in trophic level. A part of energy captured by producers is used for maintenance and as food to herbivores. From herbivores it goes to carnivores.

When energy flows from a particular trophic level to the next trophic level, she energy is always lost as heat at each step.

Each bar in the energy pyramid indicates the amount of energy present at each trophic level in a given time or annually per unit area.

(b): The two limitations of ecological pyramid are as follows:

1. It assumes a simple chain, it does not take into account the same species belonging to two or more trophic levels.Simple food chain never exists in nature, it does not accommodate a food web.

2. Saprophyte are not given any place in ecological pyramids even though they play a vital role in the ecosystem.