a) Chromatography is the method of refining which is based on the principle of adsorption. This method is based upon the principal that the different components are adsorbed to different extents on an adsorbent. 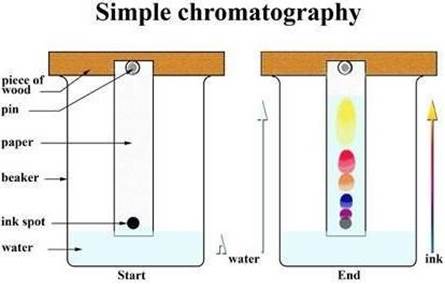 b) Role of depressant in froth floatation process:

⇒ In froth floatation process, the role of depressant is to prevent one type of sulphide ore particles from forming the froth with air bubbles.

⇒ For example, NaCN is used as a depressant to separate lead sulphide (PbS) ore from zinc sulphide (ZnS).

⇒ The reason being that NaCN forms a zinc complex, Na2[Zn(CN)4] on the surface of ZnS thereby preventing it from forming the froth.

⇒ Under these conditions, only PbS forms froth and hence can be separated from ZnS ore.

c) Role of limestone in the extraction of iron from its oxides are:

⇒ Limestone (CaCO3) acts as flux in the extraction of iron from its oxides.

⇒ The CaO thus formed acts as a flux and combine with silica (present as an impurity) to form slag.

Write down the re