(a) The three common refractive defects of vision are as follows:

This defect arises when a person suffering from it can see nearby objects clearly but can’t see the far objects.

The various causes of Myopia are:

2. Decrease in the focal length of the eye lens

Correction: Myopia can be corrected by using a concave lens of suitable power.

The Ray diagrams are as follows: 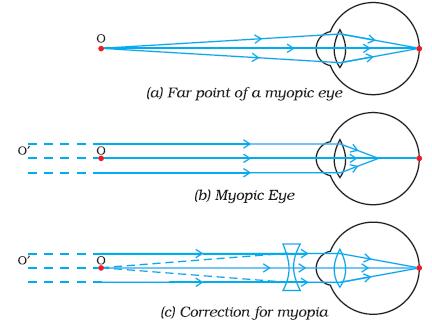 The two possible causes of hypermetropia are:

1. The focal length of the eye lens is too long.

It can be corrected by convex lens of suitable power. 3. Presbyopia. Presbyopia is the condition when the person can’t see distant as well as nearby objects.

Causes: Due to weakening of ciliary muscles of eye.

We are able to see nearby and also the distant object clearly by using bifocal lenses which consists of both concave and convex lens. The upper part of lens is Concave lens which is used for distant vision and the lower part of lens is convex lens which is for nearby objects. Bifocal lens are used in Presbyopia condition when the person can’t see distant as well as nearby objects.

(b) We see advertisements for eye donation on television or in newspapers that if cornea of the eyes are removed within 6 hours duration of death of a person, then the cornea can be transplanted to the patients who are suffering with corneal blind. If people takes initiatives of donating their eyes . they can save two corneal blind person by donating an eye to each. These advertisements are to be promoted so that people are encouraged to take the step of eye donation and also awareness should be created regarding it.