Let an inductor of inductance L, a resistance of resistance R and a capacitor of capacitance C be connected in series across an ac source of frequency f.

Let the current vary as

Where I is the current amplitude and

We know that the potential difference across the resistor is given by:

where VRm is the maximum potential across the capacitor and

We know that the potential difference across the capacitor is given by:

where VCm is the maximum potential across the capacitor

We know that the potential difference across the inductor is given by:

where VLm is the maximum potential across the capacitor and

Now, using the Pythagoras theorem, we have

Impedance, Z, is defined as

Note that the phase angle is the term inside the sine or the cosine.

The phase angle for the capacitor is

and the phase angle for the inductor is

Let us try to find the self-inductance.

Note that the inductor has some resistance. Hence, it can be though of as an ideal inductor in series with a resistor.

In the first circuit,

The resistance is given by:

(Note that the inductor acts as a short circuit)

(a) Such a device is known as a step-down transformer. 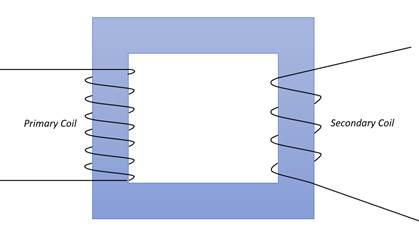 It is based on the principle of induction. If the current is changing through one coil, current is induced in a nearby coil.

The four sources of energy loss are flux leakage, resistance of the windings, eddy currents and hysteresis loss.

Length of each wire

The transformer steps down 4000V (

If there is no power loss in the transformer, we can calculate the rms current in the lines by:

The power loss in the lines is

How useful is this solution?We strive to provide quality solutions. Please rate us to serve you better.
PREVIOUS(a) If A and B reNEXT(a) Describe any
Try our Mini CourseMaster Important Topics in 7 DaysLearn from IITians, NITians, Doctors & Academic Experts
Dedicated counsellor for each student
24X7 Doubt Resolution
Daily Report Card
Detailed Performance Evaluation
view all courses

The teachers of G

A. Draw a labeled

If a LC circuit i

If a LC circuit i