2: Umbilical cord with vessels (It is a connection between the developing embryo and the placenta of the mother). It helps in transport of substances to and from the embryo.

(b) After zygote formation by fertilization, The mitotic division starts as the zygote moves through the oviduct towards the uterus and forms daughter cells called blastomeres. The embryo with 8 to 16 blastomeres is called a morula which continues to divide to form blastocyst. < Diagram of a blastocyst.

(c) Vigorous contraction of the uterus at the end of pregnancy causes delivery of the foetus. by the process known as parturition. It is induced by a complex neuroendocrine mechanism. The signals originate from the fully developed foetus and the placenta which induces uterine contractions known as foetal ejection reflex. This triggers release of oxytocin from the maternal pituitary which acts on the uterine muscle and causes stronger uterine contractions, that in turn stimulates further secretion of oxytocin. The stimulatory reflex continues causing stronger contractions which leads to the expulsion of the baby out of the uterus through the birth canal known as parturition.

(a) The stages of development of embryo in a dicotyledenous plant is as shown in the above diagram. The zygote gives rise to the proembryo and then to the mature embryo. A dicotyledonous embryo has an embryonal axis and two cotyledons. The part of the embryonal axis which is above the level of cotyledons is called the epicotyl terminating as the plumule or stem tip and the part below the level of cotyledons is hypocotyl which terminates at its lower end in the radicle or root tip covered by a root cap.

(b) Endosperm development precedes embryo development because the primary endosperm cell undergoes repeated divisions to form triploid endosperm tissue. The cells of this particular tissue is filled with reserve food materials which provides nutrition to the embryo which is developing.

Below is a diagrammatic representation of a typical dicot embryo. 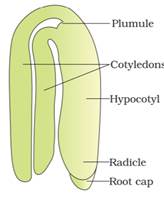