• In the case of humans, the sex-determining mechanism is XY- type.

• In both males and females, a total of 23-pairs of chromosomes are present and from which 22-pairs are autosomes and one pair is of sex-chromosomes.

• In females, a pair of X-chromosomes is present whereas X and Y chromosomes are determinant of male.

• In males, two types of gametes are produced in which 50 % of the total sperm carries the X-chromosome and the rest 50 % has Y-chromosome along with 22-autosomes.

• Females produce only one type of ovum with an X-chromosome along with 22-autosomes.

• So, there is an equal possibility of an ovum (X-chromosome) that can fertilize with any one type of sperm (X- or Y-chromosome).

• At the time of fertilization, if ovum fertilizes with sperm carrying X-chromosome then zygote will develop as female (XX) whereas the fertilization of ovum with a Y-chromosome carrying sperm results in a male (XY) offspring.

• It proves that it is the genetic makeup of the sperm that determines the sex of the child. Thus in each pregnancy, there is always a 50 % probability of either a male or a female child.

• In many birds, a female has a pair of dissimilar chromosomes ZW and male two similar ZZ chromosomes.

• In the case of honeybee, a haploid-diploid sex-determination system determines the sex of the offspring.

I) Sex determination in human 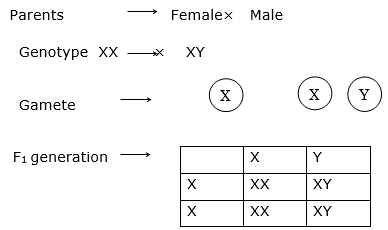 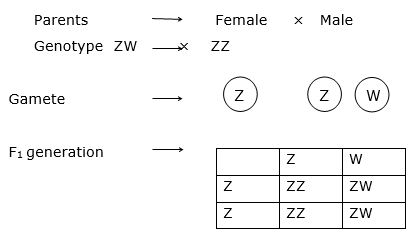 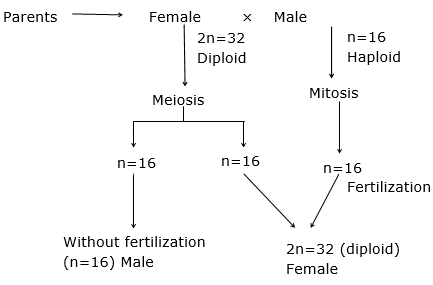 Genetic code- A codon is defined as a sequence of three nucleotides on the mRNA strand. Each codon codes for a specific amino acid.

Degenerate code-there are a few amino acids that are coded by more than one codon.

Unambiguous code-one codon codes for only one amino acid.

Universal code-codes are nearly universal from bacteria to humans for all amino acids.

Initiator code-codes for amino acids as well as act as initiator codon.

Why is the freque

It is said, that