(a) Polygenic Inheritance: In this, traits are controlled by three or more genes (multiple genes). These traits are called polygenic traits. The phenomenon shows participation of each allele. Example: For example, human skin colour which is caused by a pigment melanin. The quantity of melanin is due to three pairs of polygenes (A, B and C). If a black or very dark (AABBCC) and white or very light (aabbcc) individuals marry each othe1, the offsprings show intermediate colour also called mulatto (AaBbCc).

(b) The criteria basis which a chemical molecule can act as a genetic material are:

(i) It should be able to generate its replica or carry out replication.

(ii) It should chemically and structurally be stable.

(iii) It should provide the scope for slow changes or mutations essential for evolution.

(iv) It should be able to express itself in the form of 'Mendelian Characters’.

Oparin and Haldane proposed the hypothesis that the first form of life might have come from pre-existing non-living organic molecules and that formation of life was preceded by chemical evolution. They said that the conditions on earth were – high temperature, volcanic storms, reducing atmosphere which contained CH4 (methane) , NH3 (ammonia), etc.

In 1953, this was experimentally proved by Miller who created similar conditions in a laboratory. He created electric discharge in a closed flask containing CH4 , H2 , NH3 and water vapour at 8000 degrees. He observed that amino acids were formed. 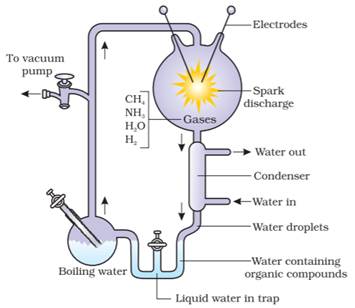