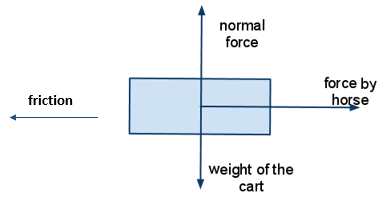 According to Newton's First Law, a body remains in its state of motion or rest until an external force acts on it. But in this case the horse has to continuously exert the force to move the cart, this is because the force of friction is acting against the motion of the cart which opposes its motion lowering the speed of cart. So the horse has to apply force to overcome this force of friction and move cart with uniform motion.

How useful is this solution?We strive to provide quality solutions. Please rate us to serve you better.
PREVIOUSA force of 4N actNEXTThe average force
Related Videos

Questions based on Acceleration due to Gravity40 mins

Get to Know More About Free Fall45 mins

The inertia of a

An object of mass

An object of mass

A car is moving o

How do the medium

Is it important t