In vapour state, sulphur exists as diatomic molecule S2. The bonding of S2 can be studied with the help of molecular orbital theory explaining the distribution of bonding and anti-bonding electrons in S2. This distribution of electrons in orbital diagram shows there are unpaired electrons which suggests that Sulphur is paramagnetic.


Nitrogen and phosphorus are in the same group 15 of the periodic table. As we go down the group generally the atomic size of the atom increases as compared to the previous element. In Phosphorus, the increased size of atoms decreases the interatomic nuclear attraction and thus increases the bond length.


This increase in bond length decreases the bond strength. For the case Nitrogen however the atomic size is small and the nuclear attraction is more giving strength to the bonds formed.


Ozone is formed by absorption of radiant heat energy i.e. hν from sunlight by oxygen molecule to give nascent oxygen. This excited nascent oxygen combines with another oxygen molecule to give ozone. In this entire process heat is absorbed by the O2 molecule. When ozone decomposes it gives out energy and entropy increases and the ΔG value is very large and negative indicating instability. Thus ozone is unstable.


When Cu is added to HNO3 nitrogen monoxide is released along with cupric nitrate precipitate.


When Cu is added into conc. HNO3, it gives out nitrogen diozide as a gas


H3PO3 undergoes disproportionation reaction to give phosphoric acid and phosphine.


Xe is the central atom and has +4 oxidation state. The structure is as follows: 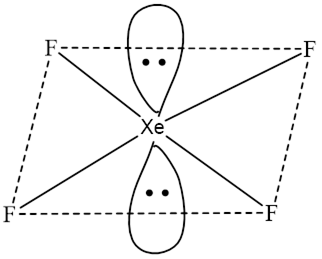 
Fluorine has very small atomic size and due to large nuclear charge the radius decreases further. Due small ionic size the electron gain energy released is very less as compared to rest of the elements in the group. The electronic configuration of fluorine is 2s2 2p5 and it requires only one electron to achieve completely filled configuration to attain stability. Thus it readily accepts one electron and undergoes reduction and acts as a strong oxidising agent.


Acidic character decreases down the group as the electronegativity decreases and the bonds become more covalent in nature, so for N2O3 the tendency to donate electron is more as compared to Bi2O3.


(c) Sulphur dioxide gas reacts with manganese oxide ion to form sulphate ion which imparts colour to the solution depending upon the metal to which it is attached. Or forms an insoluble compound in the solution indicating sulphur dioxide

How useful is this solution?We strive to provide quality solutions. Please rate us to serve you better.
PREVIOUS(a) How do you coNEXTArrange the follo
Try our Mini CourseMaster Important Topics in 7 DaysLearn from IITians, NITians, Doctors & Academic Experts
Dedicated counsellor for each student
24X7 Doubt Resolution
Daily Report Card
Detailed Performance Evaluation
view all courses

In the ring test