The aldehyde group has a higher priority than the double bond so numbering of first carbon would start from –CHO.

We notice that the double bond falls with the second carbon atom. So, we add ‘-2-en’.

As the aldehyde group is on the first carbon, we end the name with ‘-al’.

(b) Ethanol being an alcohol having the acidic hydrogen (directly attached to electronegative O atom) reacts with sodium metal to give sodium ethoxide along with the liberation of a colourless, odourless gas which rekindles a glowing splinter with a characteristic ‘pop’ sound. The gas liberated is H2.

No such observation is found when ethanal is reacted with sodium metal.

Oxidation of toluene in presence of chromyl chloride and CS2 and hydrolysis gives benzoic acid. This reaction is called Etard reaction.

Next ethanal is reacted with CH3MgBr, a Grignards Reagent and then hydrolysed to get propan-2-ol. 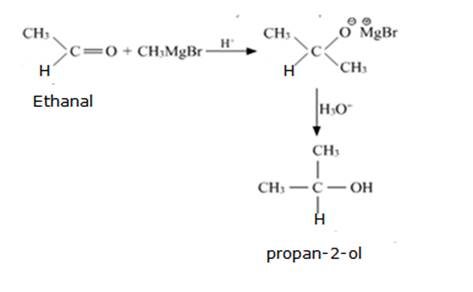 (iii) First HCN is added to propanal. CN- attacks the carbonyl carbon of propanal and forms

Next, H+ attacks the negative end to form a cyanohydrin

This cyanohydrin is further hydrolysed and due to which the –CN group gets converted to –COOH and we get the required 2-hydroxypropanoic acid.

(a) The IUPAC name of salicylic acid is 2-hydroxybenzoic acid. 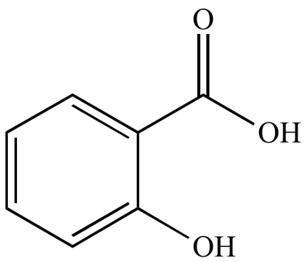 There is no such delocalisation happening in acetic acid, therefore its conjugate base is less stable.

(i) (CH3)3C–CHOreduces in the presence of Zinc amalgam and dil. HCl to give (CH3)3C–CH3. This reaction is called Clemmensen reduction reaction and it reduces the –C=O to –C=H2.

(ii) As the aldehyde(CH3)3C–CHO does not have an alpha hydrogen atom, two molecules of the aldehyde react to give sodium salt of the carboxylic acid (if NaOH is used as base) and the alcohol.

This reaction is termed as Cannizaro Reaction.

(iii) (CH3)3C–CHO reacts with semicarbazide and a weak acid to give :