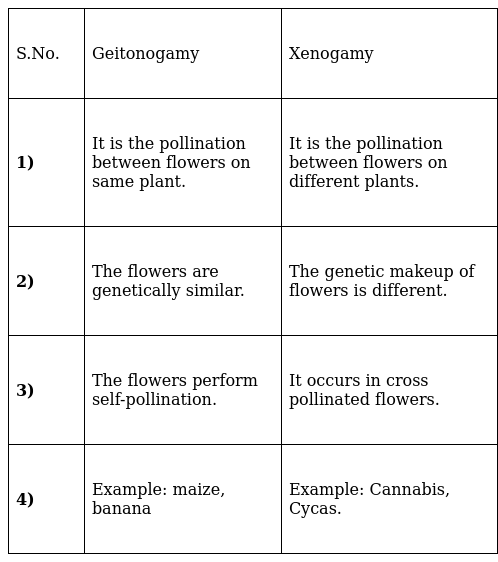 b) Characteristics of wind pollinated or anemophilic flowers are:

1) Flowers are not attractive, scented or nectar producing.

1) The process of development and production of female gamete is called oogenesis. It is initiated during the embryonic development stage where mother cells (oogonia) are formed within each fetal ovary.

2) These cells divide and enter into prophase-I of the meiotic division and get temporarily arrested at that stage, called primary oocytes.

3) Each primary oocyte then gets surrounded by a layer of granulosa cells and is called the primary follicle.

4) The primary follicles get surrounded by more layers of granulosa cells and a new theca and are called secondary follicles.

5) The primary oocyte within the tertiary follicle (formed after the transformation of secondary follicle due to formation of antrum, the fluid filled cavity) grows in size and completes its first meiotic division and forms a large haploid secondary oocyte and the first polar body.

6) The tertiary follicle further changes into the mature follicle or Graafian follicle which ruptures to release the secondary oocyte (ovum) from the ovary by the process called ovulation.

7) Fertilization induces the completion of the meiotic division of the secondary oocyte which results in the formation of a second polar body and a haploid ovum (ootid).