a) The pollen tube after entering one of the synergids, releases the two male gametes into the cytoplasm of the synergid. One of the male gametes moves towards the egg cell and then fuses with the nucleus - syngamy resulting in zygote. The other male gamete moves towards the two polar nuclei and fuses to produce a triploid primary endosperm nucleus (PEN). The fusion of three haploid nuclei is thus termed as triple fusion. 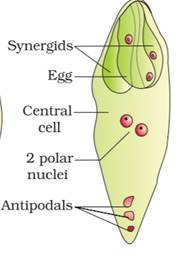 b) Primary endosperm nucleus gives rise to endosperm by its repeated mitotic division. Coconut water is free-nuclear endosperm (made up of thousands of nuclei) and the white kernel is the cellular endosperm.