• There is single DNA-dependent RNA polymerase that catalyses transcription of all types of RNA in bacteria.

• It uses nucleoside triphosphates as substrate and polymerises in a template depended fashion following the rule of complementarity.

• It also facilitates opening of the helix and continues elongation.

• Only a short stretch of RNA remains bound to the enzyme.

• Once the polymerase reaches the terminator region the nascent RNA falls off so also the RNA polymerase terminating the process of transcription. 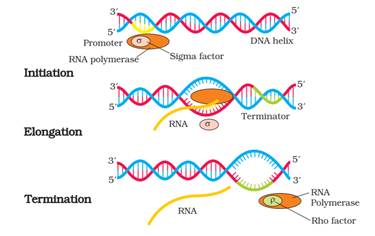 • There is a clear cut division of labour.

• The primary transcripts contain both the exons and the introns and are non-functional.

• Hence it is subjected to a process called splicing where the introns are removed and exons are joined in a defined order.

a) T.H. Morgan selected Drosophila melanogaster as a specimen for his experiments because of the following reasons:

• They could be grown on simple synthetic medium in the laboratory.

• They complete their life cycle in about two weeks, and a single mating could produce a large number of progeny flies.

• A clear differentiation of the sexes – the male and female flies are easily distinguishable.

• It has many types of hereditary variations that can be seen with low power microscopes.

b) Morgan hybridised yellow-bodied and white-eyed females, to brown-bodied and red-eyed males, and intercrossed their F1 progeny. He observed that the two genes did not segregate independently of each other, and the F2 ratio deviated very significantly from the 9:3:3:1 ratio that is generally expected when the two genes are independent.

A person has to p

What are the char