b) A labelled diagram of a mature pollen grain is as follows: 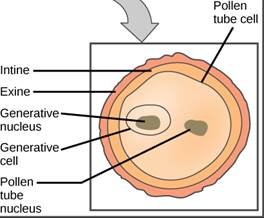 Oogenesis starts during the embryonic development stage when a couple of million gamete mother cells (oogonia) are formed within each fetal ovary.

The three hormones linked with oogenesis are

• Estrogen (secreted by the ovaries)

• Progesterone (secreted by the corpus luteum in the ovary)

Role of Gonadotropins (FSH and LSH):

(ii) Both LH and FSH attain a peak value in the mid of the cycle.

(iii) LH induces the Graafian follicle to burst and eject its egg into the fallopian funnel. This is called ovulation.

(iv) LH stimulates formation of corpus luteum from the ruptured follicle and secretion of progesterone from it.