(a) Explain the m

(a) Inertia is the resistance of the object to any change in its motion, including a change in direction. An object will stay still or keep moving at the same speed and in a straight line, unless it is acted upon by an outside force.

The tendency of an object to resist any change in its state of rest or of uniform motion is called inertia.

1. A ball rolling down a hill continues to roll unless frictional force stops it.

2. A person sitting in the bus falls on one side when the bus takes a turn.

3. The swirling of tea continues in the glass even after we stop stirring it.

(b) The balls will be moving in the same direction in which train was moving due to inertia of motion. The train comes to rest due to applied breaks but due to inertia of motion, the balls being to roll forward. Masses of balls are not same therefore different inertial forces are acting on them. Iron ball has more mass hence more inertia than rubber ball of same size. Thus iron ball will attain less speed than rubber ball. 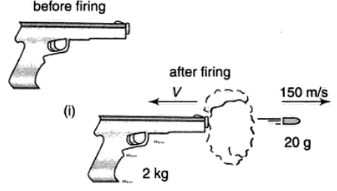 The direction of bullet is taken from left to right, thus positive

Let, V be the recoil velocity of the pistol.

Equating equation 1 and 2 according to the law of conservation of momentum, i.e. total momentum after the fire is equal to total momentum before the fire,