In Rosenmund reduction reaction Acyl chloride (which is ClC=Oacid chloride) is hydrogenated on the catalytic reaction of palladium (Pd) in presence of barium sulphate.

• Hence, as the negative charge on a species increases its reactivity towards HCN decreases.

• Amongst the given compounds, +I (electron releasing effect ) increases as 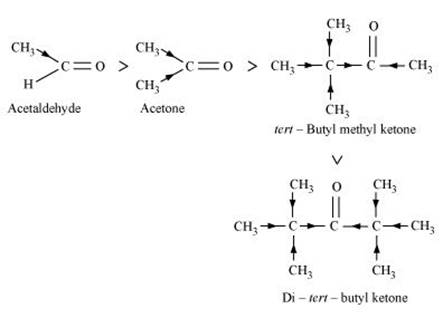 • This is an example of Hell-Volhard-Zelinsky reaction , where the propanoic acid which has α-H atoms gets halogenated on reaction with chlorine and presence of small amount of phosphorus and forms corresponding

Hence the product will be 2-chloropropanoic acid,

This is an example of Etard reaction , where Chromyl chloride(CrO2Cl2)at first oxidises the methyl group of the given aromatic compound toluene to a chromium complex then by hydrolysis it gives corresponding benzaldehyde.

• The correct increasing order of acid strength of the given acids 4-Methoxybenzoic acid< Benzoic acid<4-Nitrobenzoic acid.

• This is due to the nature (electron donating/withdrawing property) of the functional groups attached to the aromatic ring and as electron donating (such as –OCH3) groups decreases the acidity of benzoic acids and ele ctron donatuiob groups ( such as NO2) increases their acidity the order is justified.