(a) Draw the stru 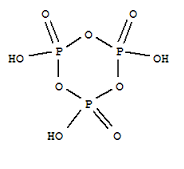 In the above structure every P atom is connected through sigma bonds by 2 oxygen atom, 1 -OH atom and through 1 oxygen, it is connected with double bond and makes a hexagon.

In the above structure, Br is at the centre but also has 2 lone pairs and due to which through bond-pair lone-pair repulsion, it doesn’t form trigonal planar structure and make angle less than 120° . The angle formed is actually 86.2°.

In the above reaction,

Multiplying equation (i) by 1 and equation (ii) by 2, we get as below,

In the above reaction SO3(Sulphur trioxide simply reacts with Sulphuric Acid and form Disulphuric acid as below.

In the above reaction,

Calculating from above equations(i), (ii) and (iii), we get as below;

This is a type of disproportionation reaction where, chlorine is getting reduced as well as oxidized.

(i) The basicity of an acid is the number of hydrogen ions, which can be produced by one molecule of the acid.

Although H3PO3 has 3 hydrogen atoms in the molecule, but it has 2 replaceable H+ ions that it can produce as one hydrogen atom is attached directly to phosphorus and can’t be released as a proton. So, the basicity is 2.

(ii) Since, oxidation state of F atom is -1 as it is the most electronegative element, it can form only one bond. So, it cannot be the central atom in an interhalogen compound.

(iii) From the name noble gases or inert gases, we get to know that they are inert in nature. Also, they are non polar and have weak intermolecular forces, which means that there are very less attractions amongst them. So, it is easier to convert them from liquid to gas, hence they have low boiling points.