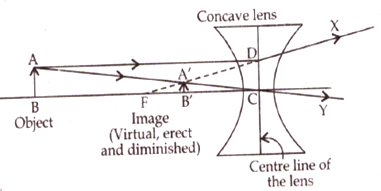 When an object is placed any-where between infinite and optical center of a concave lens, the image formed is

The relation between u, v and f is given by the lens formula:

We know that the focal length of a concave lens is negative, so the above equation will be changed to,

According to the lens formula,

Because the focal length is positive, thus it is convex lens.

Since power of lens is positive, lens will be converging in nature.