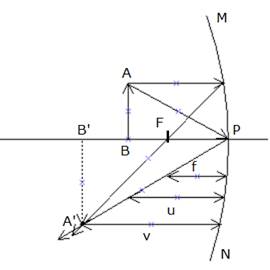 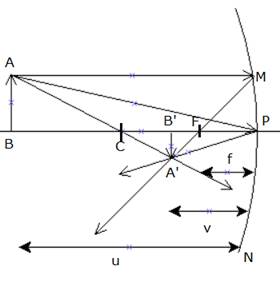 From the figure given above, we can see that the two right-angled triangles A’B’F and MPF are similar. For paraxial rays, MP can be considered to be a straight line perpendicular to CP. Therefore,

Comparing equations (i) and (ii), we get

The light travels from the object to the mirror MPN. Hence this is taken as the positive direction. To reach the object AB, image A’B’ as well as the focus F from the pole P, we have to travel opposite to the direction of the incident light. Hence, all three will have negative signs. Thus,


Using these in equation (iii), we get

This relation is known as mirror equation where v = image distance, u = object distance and f = focal length.


Linear magnification m for a mirror is given as


1. In reflecting type telescope there is no chromatic aberration as the objective is a mirror.


2. Image is brighter compared to the one formed in refracting type telescope.


a) Wavefront: A locus of the points which oscillate in the same phase is called a wavefront. Thus, a wavefront is defined as a surface of constant phase. 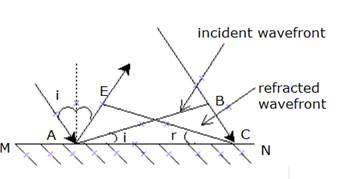 Let the speed of the wave in the medium be ‘v’


Let the time taken by the wavefront, to advance from point B to point C is τ


b) The size of the central maxima is given as

Where λ = wavelength of light


D = distance between slit and screen


∴ Size of central maxima reduces to half.


Intensity will increase. This is because the amount of light, entering the slit, has increased and the area, over which it falls, decreases.


c) When a tiny circular obstacle is placed in the path of light from a distant source, a bright spot is seen at the centre of the obstacle because of diffraction of the light source and in case of diffraction the central maxima is always bright.

(i) State and exp

Consider a ray of