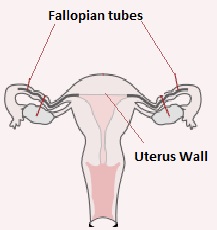 (b) The process in which the fusion of the haploid male gamete or sperm and the haplod female gamete or ovum to form a diplod cell i.e., zygote is known as fertilization. Fertilization in humans takes place in fallopian tube of the female reproductive system.

a. During fertilisation, a sperm comes in contact with the zona pellucida layer of the ovum and blocks the entry of additional sperms. This ensures that only one sperm can fertilise an ovum.

b. The enzymatic secretions of the acrosome help the sperm enter into the cytoplasm of the ovum through the zona pellucida and the plasma membrane.

c. This causes the completion of the meiotic division of the secondary oocyte.

d. The second meiotic division is also unequal and results in the formation of a second polar body and a haploid ovum (ootid).

e. Then, the haploid sperm nucleus fuses with the haploid nuclues of the ovum to form a diploid zygote. a. The terminal part of the stamen bears the anther. It consists of two lobes.

b. Both the lobes has two chambers (loculi), they are called as the pollen sacs or microsporangia.

d. The four pollen sacs or microsporangia lie in the four corners of an anther.

e. The pollen sacs or microsporangia develop hypodermally in anther from strips of archesporial cells.

f. When anther is young, each microsporangias are occupied by sporogenous tissues (group of homogenous cells arranged compactly).

(c) The germ pores are pertures in the exine layer of the pollen grain where the sporopollenin is absent. The germ pore helps in the formation of the germ tube or pollen tube soon after pollination and the release of male gametes during fertilization.

In the figure giv

What are the poss