(a) The following diagram illustrates emf being induced in a coil due to a moving magnet. Moving a magnet changes the magnetic flux through the loop. Changing flux induces magnetic field.

) induced in the coil is related to theS magnetic flux(

) induced in the coil is related to the magnetic flux(

Where x in the length of the wire and y is the breadth.

As the coil is moved out, the length changes according the velocity as

(i)Now, velocity of both loops is same but the breadth y of square loop is more than that of rectangular loop. Hence, the emf induced will be more in square loop.

However, as the field is constant and the loops are moving within the field region, there will be no emf induced in either loops.

(a) AC generator is a device which converts mechanical energy into electrical energy in form of alternating current(AC). AC generator works on the principle of electromagnetic induction. As the coil, placed in between the two poles of the magnet, rotates, the changing area induces a current in the coil.

(b) The following diagram illustrates an AC generator. 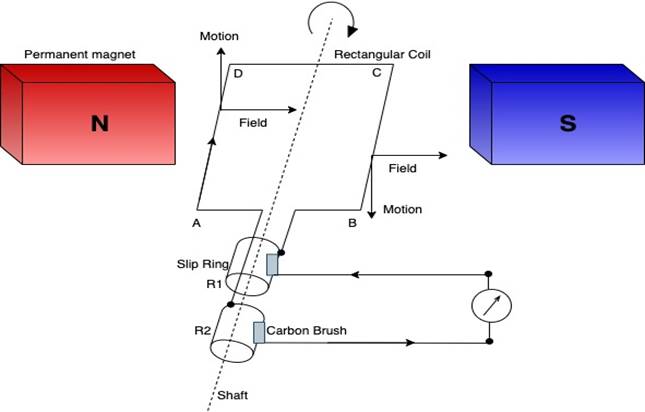 Here, the coil is mechanically rotated at angular velocity

. The angle between the area vector A and the magnetic field B changes as

Now, the magnetic flux is given by

Therefore, the induced emf for a coil of N turns is