A. Structure of tRNA:

tRNA is also known as sRNA (soluble RNA) has an amino acid acceptor end to which it binds to amino acids. It has an anticodon loop that has bases complementary to the code. For each amino acid there is a specific tRNA. 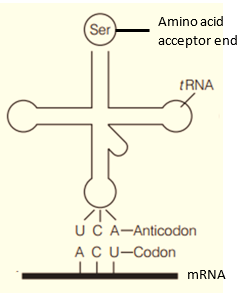 The secondary structure of tRNA is like a clover-leaf. Actually the tRNA is a compact molecule which looks like inverted L.

i. The function of tRNA is to arrange specific amino acids according to the nucleotide sequence of mRNA.

ii. tRNA is an adapter molecule because it reads the genetic code on one hand and transfers amino acids on the other hand.

iii. It acts as intermediate molecule between triplet code of mRNA and amino acid sequence of polypeptide chain.

B. The primary transcripts formed in eukaryotes non- functional because it has introns or non-coding sequences and the coding sequences or the exons. This is called heterogeneous nuclear RNA or hnRNA. The hnRNA undergoes a process where the introns are removed and exons are joined to form mRNA, which is functional RNA. The removal of introns and joining of exons is called splicing.

Do you think that

What are the func