(a) Describe in s

(a) Microsporogenesis – It is a process in which microspores arre formed from a pollen mother cell through meiosis.

When anther develops the cells of the sporogenous tissue undergo meiotic divisions to form microspore tetrads.

Each sporogenous tissue give rise to a microspore tetrads and is known as pollen or microspore mother cell (PMC).

At this 2 - celled stage the pollen grains are shed. Sometimes the generative cell divides mitotically to give rise to two haploid male gametes that are shed at 3 - celled stage. 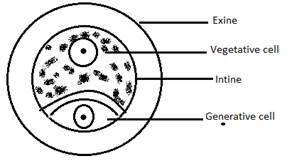 The above diagram shows two celled final structure formed during microsporogenesis in angiosperms. b) Spermatogenesis: It is the process through which sperms are produced in the testes. It begins at puberty. Spermatogenesis starts at the age of puberty due to significant increase in the secretion of gonadotropin releasing hormone.

Pituitary hormones: The pituitary gland releases follicle stimulating hormone (FSH) and luteinizing hormone (LH) into the male system. FSH enters the testes, stimulating the Sertoli cells, which help to nourish the sperm cells that the testes produce, to begin facilitating spermatogenesis. LH triggers the production of testosterone from the Leydig cells of the testis; testosterone causes the development of secondary sex characteristics in the male.

Sex hormones: The sex hormone involved in the process of spermatogenesis is testosterone. It is a steroid hormone which is produced primarily in the testes of the male. It is responsible for the development of secondary sex characteristics in the male