a. Biomagnification is the increasing concentration of a substance, such as a toxic chemical, in the tissues of tolerant organisms at successively higher levels in a food chain.

The concentration of DDT is increased at successive trophic levels; say if it starts at 0.003 ppb (ppb = parts per billion) in water, it can ultimately can reach 25 ppm (ppm = parts per million) in fish-eating birds, through biomagnification.

b. High concentrations of DDT can cause a decline in bird population. It can disturb calcium metabolism in birds, which causes thinning of eggshell and their premature breaking, eventually affecting the population of birds. 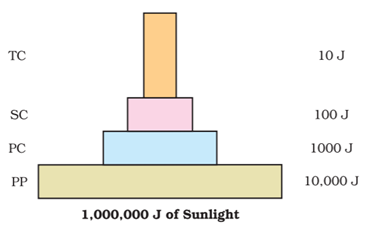 b. Limitations of ecological pyramids are:

i. It does not take into account same species belonging to two or more trophic levels.

ii. It assumes a simple food chain which never exists in nature. It does not accommodate a food web.

iii. Saprophytes which are so significant are not given a place