Suppose an uncharged capacitor of capacitance

At time t, the capacitor has charge

. Let the potential difference across the plates be

is being transferred from one plate to another. The work in this process is given by:

This work done is stored as energy on the capacitor.

The energy stored by the capacitor when it is charged is given by:

The charge on the capacitor is

Now, when the capacitor is connected to the other capacitor, they both get the same charge in equilibrium by symmetry. As the total charge remains the same, the charge on each capacitor is

Now, the energy stored is

be separated by a distance

. Let point P be any point on the equatorial line of the dipole. Let it be a distance 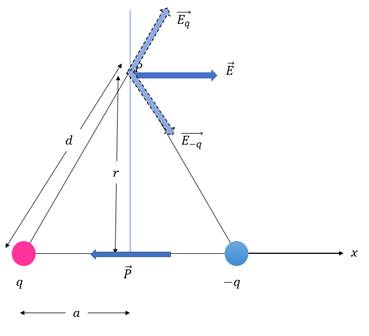 The electric field at P due to the charges is:

The vertical components will cancel out. We need to add the horizontal components. Hence,

be the unit vector in the direction of the dipole moment (from positive charge to negative charge).

All charges must be in equilibrium. As the coulomb force depends upon distance and by symmetry, the charge Q must be in the middle of the two charges. For the forces to balance on the q’s, Q must have opposite sign to that of q.

Do you think Ibn