The three parts of the transistor are :

(i) Emitter: It is of moderate size and heavily doped. It supplies a large number of majority carriers for the current flow through the transistor.

(ii) Base: This is the central segment. It is very thin and lightly doped.

(iii) Collector: This segment collects a major portion of the majority carriers supplied by the emitter. The collector side is moderately doped and larger in size as compared to the emitter. 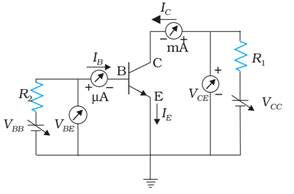 with the base-emitter voltage

is called the input characteristic. Similarly, the variation of the collector current

with the collector-emitter voltage

A curve is plotted between the base current

against the base-emitter voltage

is kept fixed while studying the dependence of 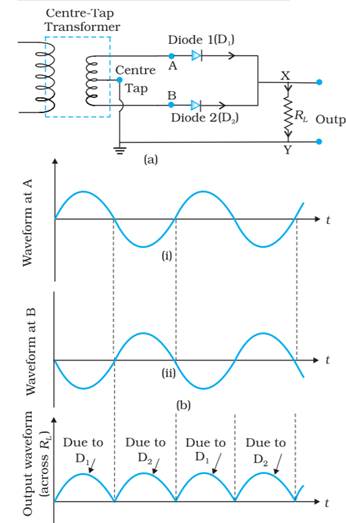 Suppose the input voltage to A with respect to the centre tap at any instant is positive. It is clear that, at that instant, voltage at B being out of phase will be negative as shown in. So, diode D1 gets forward biased and conducts (while D2 being reverse biased is not conducting). Hence, during this positive half cycle we get an output current (and a output voltage across the load resistor RL) In the course of the ac cycle when the voltage at A becomes negative with respect to centre tap, the voltage at B would be positive. In this part of the cycle diode D1 would not conduct but diode D2 would, giving an output current and output voltage (across RL) during the negative half cycle of the input ac. Thus, we get output voltage during both the positive as well as the negative half of the cycle.

Each diode rectifies only for half the cycle, but the two do so for alternate cycles. Thus, the output between their common terminals and the centretap of the transformer becomes a full-wave rectifier output.

How useful is this solution?We strive to provide quality solutions. Please rate us to serve you better.
PREVIOUS(a) Three photo dNEXT(a) If A and B re
Try our Mini CourseMaster Important Topics in 7 DaysLearn from IITians, NITians, Doctors & Academic Experts
Dedicated counsellor for each student
24X7 Doubt Resolution
Daily Report Card
Detailed Performance Evaluation
view all courses