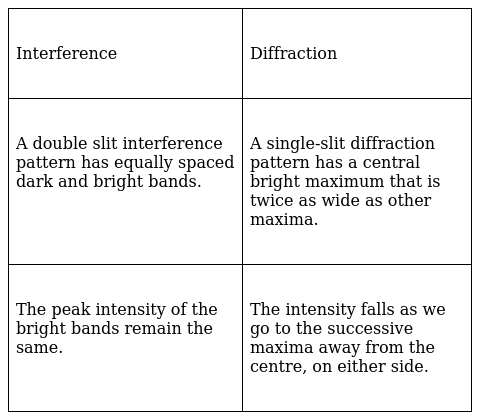 The electric filed from the light at each of the sources S1 and S2 can be written as,

where each source of light has maximum electric filed strength

At P, by principle of superposition,

As intensity is the square of the amplitude,

Size of one maxima/minima (except the central),

Now, the required patriation has four fringes. Hence, the distance is:

The conditions for total internal reflection are:

(i) Light must be trying to travel from optically denser medium to optically lighter medium.

(ii) The angle of incidence must be greater than a certain angle known as critical angle. 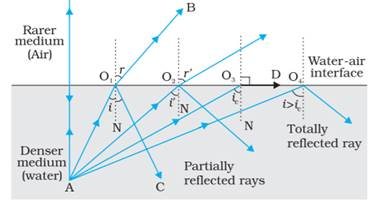 Let us consider the condition when the angle of incidence is equal to critical angle,

are the refractive indices of medium 1 and medium 2 respectively. Let

be the refractive index of 1 with respect to 2.

Thus, we have obtained the required relation.

The lens formula is:

where f is the focal length, u is the object distance and v is the image distance. All quantities are measured with the cartesian sign convention (the sign convention in NCERT).

Let us consider the lenses one by one.

The first lens forms an image of the given object.

The image I1 formed by the first lens acts as an object for the second lens.

Let us now consider the third lens. It is a converging lens as it has a positive focal point. An object at infinity would have its image at the focal point (either of the focal points as the object is in either direction).

Hence, the final image is formed at 30cm from the third lens at either side.

(i) Derive the ma