Stopping potential is the necessary potential applied externally to prevent the most energetic electron from reaching the endplate. 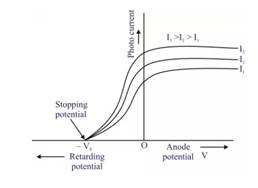 and this should be equal the Kinetic energy of electron which just fails to reach anode whose K.E will be given as

is the work function of metal.


Equating it we get

We can see the stopping potential doesn’t depend upon the intensity of light rather depends only on the wavelength of light and work function of the metal.


And saturation current for higher intensity of light is more as the number of photons falling on the metal plate per unit area increases, which consequently allows more electrons to escape escape from the metal surface

A. How does one e