So, from general understanding, we can say that self-inductance is related to the magnetic flux of a coil when the unit current is flowing through it.


In other words, self-inductance is the emf induced in the coil when the rate of change of current in the coil is 1ampere/second.


S.I. unit of self-inductance is Henry(H). 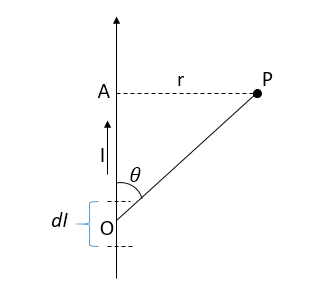 
i = current carried by infinite wire


r = perpendicular distance of wire to the point

Force on a straight wire is given by,

Using right-hand rule, we can find the direction of the magnetic field for I1.

In the square magnetic field is acting in the downward direction.


Now, for side AB l is +y direction, B is downward,

is in x-direction and magnitude of the force is,


As for BC and AD forces are equal but opposite in direction so they will cancel out each other.


And for side CD, l is -y-direction, B is downward,

is in +x direction and magnitude of the force is,


So, net force will be in –ve x-direction,