(i) Pole- The centre of the spherical mirror is called pole represented by P.

(iii) Principal axis- of a spherical mirror is the straight line joining the centre of curvature and pole of the mirror. The principal axis is normal to the mirror at the pole.

(b) Ray diagrams of principal focus:

(ii) Convex mirror: In a convex mirror, the reflected rays do not actually pass through the focus (F), they appear to diverge. Thus, a convex mirror has a virtual principal focus situated behind the mirror. 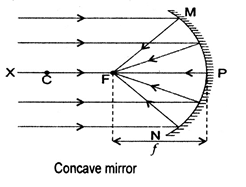 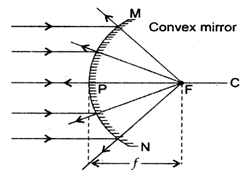 (c) The mirror used in the given diagram is a concave spherical mirror. Image formed (Q) is virtual, erect and magnified.

What is meant by?

If the focal leng

In a convex spher

Out of convex mir