(a) Define a wave

(a) A wave-front is defined as the locus of all points in a wave surface having a constant phase or same phase.

(b) Huygens principle states that every point in a wave-front is a source of secondary wavelet.

(i) The following diagram shows a wave-front reflected from a concave mirror.

(ii) The following diagram shows a wave-front refracted from a convex lens. 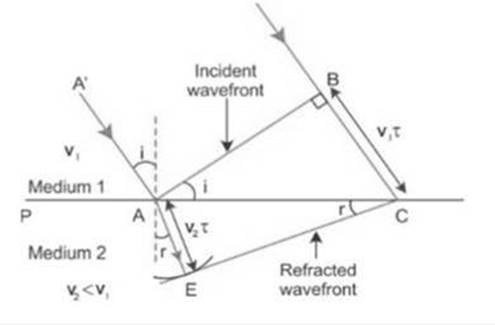 Let the speed of light in two mediums be

be the time taken by wavefront to travel distance BC.

Now, we draw an arc of radius of length

from A. Next we draw a tangent from C to the arc. Creating

Now, we know that the refractive index relates to the velocities as

Thus, Huygens principle can be used to prove Snell’s law of reflection.

(a) The following diagram illustrates the image formation by a concave mirror.

As evident from the figure,

Dividing both sides with uvf and rearranging we get

Which is the mirror equation.

(b) We know, the lens equation is

where, v is the image distance, u the object distance and f is the focal length.

Here it is given that the image distance,

. We need to find the image distance in both the cases.

(i) given, focal length,