A current loop of arbitrary shape lies in a uniform magnetic field B. Show that the net magnetic force acting on the loop is zero.

Let,
Uniform magnetic field existing in the region of the arbitrary loop = B
current flowing through the loop be i.

Length of each side of the loop be l.

Assuming the direction of the current clockwise.

Direction of the magnetic field is going towards the plane of the loop.

Magnetic force is given by

l = length of the wire

and θ = the angle between B and l 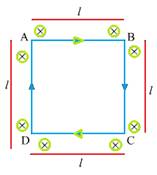 Direction of force can be found using Fleming’s left-hand rule.

Force F1 acting on side AB is

Force F2 acting on side DC =

Since, F1 and F2 are equal and in opposite direction, they will cancel each other.

Since, F3 and F4 are equal and in opposite direction, they will cancel each other

Hence, the net force acting on the arbitrary loop is 0.

How useful is this solution?We strive to provide quality solutions. Please rate us to serve you better.
PREVIOUSA rectangular wire-loop of width a is suspended from the insulated pan of a spring balance as shown in figure. A current i exists in the anticlockwise direction in the loop. A magnetic field B exists in the lower region. Find the change in the tension of the spring if the current in the loop is reversed.NEXTProve that the force acting on a current carrying wire, joining two fixed points a and b in a uniform magnetic field, is independent of the shape of the wire.
Related Videos