a) Construct a co 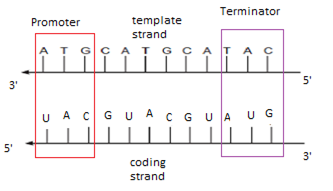 (a) The two events in which DNA is unzipped are:

• Replication – the process of copying of DNA strand. Replication occurs within a small opening of the DNA helix called replication fork. It requires a set of catalysts (enzymes) like :

DNA polymerase, it uses a DNA template to catalyse the polymerization of deoxynucleotides.

Deoxyribonucleoside triphosphate, it acts as a substrate and provides energy for the polymerization reaction.

• Transcription: it is the process of formation of m RNA from a double stranded DNA molecule.

(b) If both the strands of DNA participate in the transcription process,

• Then both these strands act as the template and would code for RNA molecules with different sequences and in turn code for proteins with different amino acids. We know that each strand of DNA are not identical but are only complementary to each other.

Hence one segment of DNA would code for two different proteins, and this would complicate the genetic information transfer machinery.

• The two RNA molecules if produced simultaneously would be complementary to each other, hence would form double-stranded RNA. This would prevent the RNA from being translated into protein and thus making the transcription process useless.